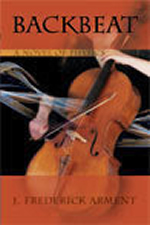 The use of physics in this novel is more than artifice. Point of view depends on the reader’s frame of reference, plots resonate through time, and characters superimpose as waves of energy. Even the words seem to vibrate on the page.

Threaded through the new novel, Backbeat: A Novel of Physics, is an accessible description of the principles and theories of quantum physics. As a result, readers share with the lead character not only a heartfelt orphan’s plight, but also five epiphanies, or intuitive insights, which we can all gain from a deeper understanding of physics.

“Backbeat: A Novel of Physics” is all of the following and more:

• The universal story of an orphan’s quest for family told in the language of physics
• The first novel that brings quantum physics to bear on human relationships
• A coming-of-age novel in which an orphan learns spiritual maturity through his mother’s lost letters
• A novel of physics that celebrates the 100th anniversary of Einstein’s theories: 1905-2005
• An inspirational story in which readers share five insights through an understanding of physics
• A murder mystery in which the solution involves investigating universal questions of life
• A love story told in light of an eternal and timeless physics of love

Don’t miss this one-of-a-kind novel that brings the new language and insights of quantum physics to bear on the way we live and die. You comments will be appreciated!